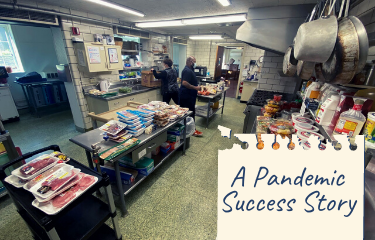 Finding Solutions in the Midst of Uncertainty

Food for the Soul, a soup kitchen & food distribution program based out of Transfiguration Spirituality Center, started as a response to the shutdown in March of 2020. As the center saw a growing need for food assistance in their neighborhood, they were grappling with how to keep on their kitchen staff when all retreats had been cancelled for the foreseeable future. Putting the two problems together, they decided to start a food outreach program with the mission to serve God by serving the community. Now, just over a year later, Food for the Soul is an official, ongoing community outreach program and an integral part of fighting food insecurity in Glendale & the surrounding neighborhoods. They prepare and deliver nutritious meals, offer grocery box pickups, and provide hot meals on site.

When the organization first started providing food for the community, they were primarily receiving non-perishable donations & stretching their small budget to buy the rest of what they needed to feed as many people as they could. In January of 2021 they connected with Last Mile and quickly set up a plan to start receiving donations from a nearby Kroger and a handful of UDF stores.

“There were a lot of times in the last year when we’ve had to sacrifice quality for quantity but since we’ve been dealing with Last Mile, we haven’t had to do that.”

Cecil Williams, the head cook, says that he’s most enjoyed the variety of meats they’ve received through Last Mile donations. “I’ve been able to make stir fry, gumbo, even Irish beef stew for St. Patrick’s Day.” He says that the variety and quality of food has greatly increased, which makes him proud as a chef and blessed to see so many people benefit from what he’s able to cook now that he has more resources to be creative in the kitchen.

“What Last Mile has done for us is they have allowed us to provide more than just the potatoes or the starches and the things that you can get from the Freestore Foodbank or a box at a pantry,” says Mary Knight, Director of Food for the Soul & Community Outreach. “Now we’re able to deliver fresh fruits and vegetables and nice high quality meats. And that’s all because of this rescue program.”

Mary says she’s received incredibly touching feedback following their recent distributions. In March someone called after receiving a box of delivered groceries to thank her. “She could not believe there were stuffed pork chops and fresh fruits and greens!” Mary says, smiling. “They were just amazed at the variety that they received. It was a healthy variety. It was nourishing! The comments have just been overwhelming.”

Last Mile exists to empower organizations like Food for the Soul to feed more people better food. If your organization is in need of good food like this, please check out our partners page to learn more about receiving food donations from Last Mile.