We rescue from the Reds and FCC Stadiums the day after each game.

At the Reds stadium you’ll pull up to the dock, call a number, and they’ll bring the food right out to your car. It’s usually a mix of meat, vegetables, and some stadium snacks. These rescues vary widely depending on how many people came to the game. The rescues go just a few blocks down the street to the Men’s Shelterhouse, so sometimes volunteers end up doing two runs. However, if you can’t fit it all in your car and you don’t have time for a second run, call us and we’ll schedule another person to pick up the rest!

To get to the dock at FCC you have to call a number to have them let you in a locked gate. Then they’ll bring out the food right to your car. It’s usually all frozen ready-to-eat food that’s been packaged and labeled. These rescues typically all fit in one car.

Follow Food Rescue Hero, Paul, on a rescue from the Reds stadium in this news video by WLWT 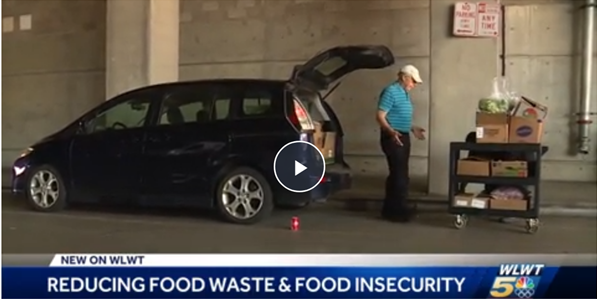